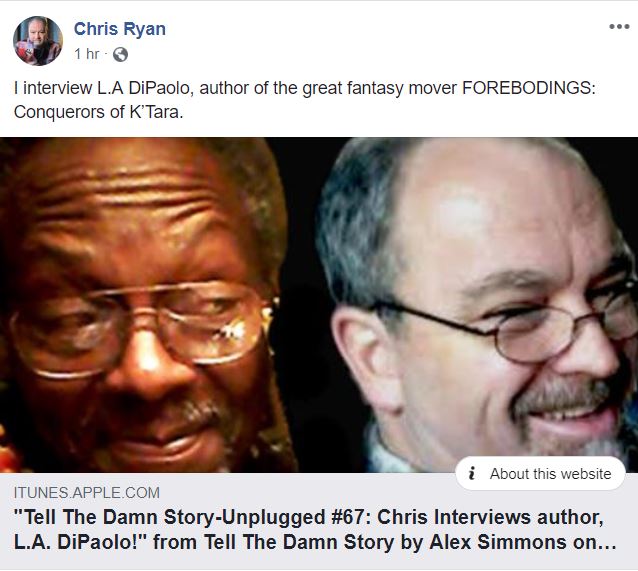 Two bits of good news today came my way this evening, about an hour apart from each other! Firstly, Chris Ryan, producer, teacher, and author (of City of Sin crime thriller, Black Jack Pulp Fiction, and other stories) has just released an interview he did of me at PhilCon (Philadelphia Science Fiction Convention) back in November. I haven’t even listened to it myself, yet, for fear that I might decide not to tell anyone, so nervous I was during the interview. Indeed, I had never been interviewed before, and I had not expected to be, so I had not prepared, even though my business experience should have told me to expect the unexpected. Now, I know better, and I will prepare myself for whatever else may come. But I am fiercely thankful to Chris Ryan who kept going despite my fumbling, and laughed with me along the way. You can find the interview on the Tell that Damn Story podcast on Google Play, ITunes, and on other sites (see here).

Secondly, Amazon has just informed me that the audiobook of Forebodings – Conquerors of K’Tara Book 1 has been approved and is now available for sale around the world (in English). If you enjoy audiobooks, get your copy on Amazon. The audiobook, as you may know if you’ve followed its progress, was narrated by a great British Narrator, now living in the US, Adam R. Watson. And I say great because Adam did the multiple male and females voices, giving several characters their own distinct voices, which is not an easy job, especially during a conversation involving both male and females protagonists. Thank you, Adam! If do not have the budget for an audiobook at the moment (it is $17.47), I will have Audible credits available soon to give away to those who will obtain a copy, and review it.