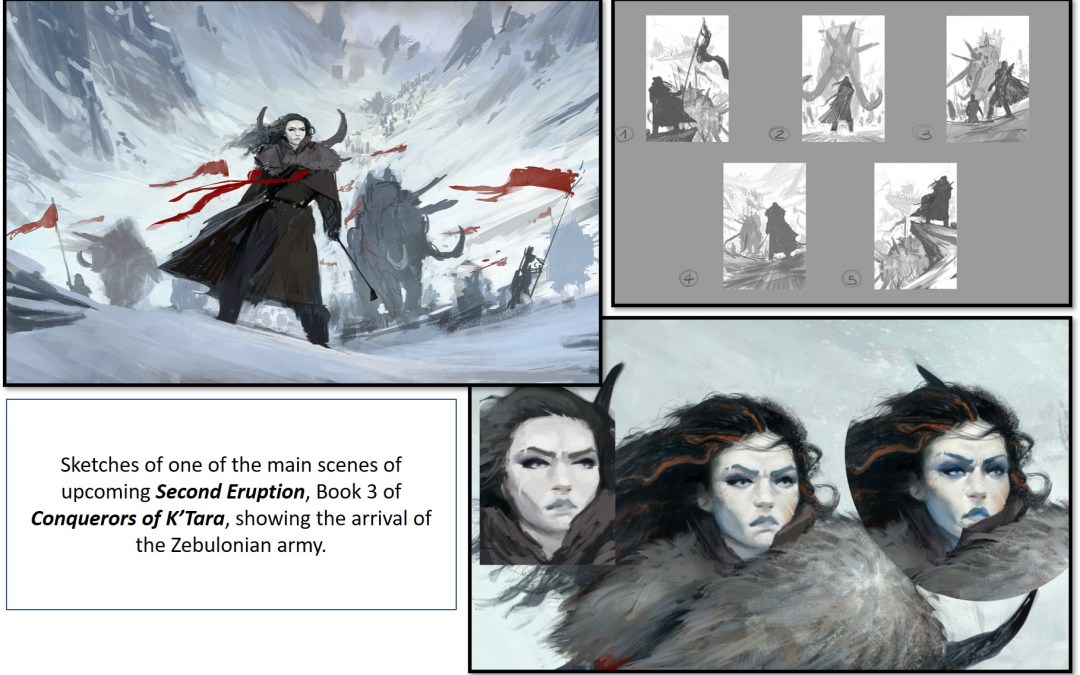 As I communicated last month, I am busy, these days, with so many projects that I have little time to provide updates, except for updating the stats counter on my web site which shows the percent complete for Eruption (Book 2 of Conquerors of K’Tara) and for the French-language translation of Forebodings.

So, tonight, after writing a letter to my son, I decided to provide you with this overdue update, while listening to Relax, Take it Easy by Mika (if you don’t know it, you should give it a listen; it will throw those of you who grew up with the music of the Bee Gees right back to those days, and if you don’t know Mika–an English, French, Lebanese singer being compared to Freddy Mercury, you should listen to some of his repertoire).

Secondly, the release of the complete Lusk’s song (a.k.a Insanity) is happening this week or next. I will make it available for free to anyone who wishes to download it. I will put links on my website, as well as on SoundCloud, and on Audible, to accompany the audiobook. This project, in particular, has kept me so excited all summer long because it is quite an overwhelming sensation to hear one’s words put to music, especially with Adam R. Watson’s voice; he is as impressive a singer as he is a narrator.

Finally, the update on Eruption. The completion of Book 2 has unfortunately been slowed because of the previous two projects, but I am 80% done writing, so, though I may release it later than previously expected (i.e. by March 2020 or so, instead of December 2019), I will still get it done within about two years, which is not bad for this type of work. What I can tell you is that it will address many questions readers had after reading Forebodings: questions about the types of powers that Lux Baiulae have access to, questions about the identity of the true enemy, and questions about some of the protagonists’ evolving relationships. And, of course, it will take the story to its next chapter, which the working title, Eruption, definitely hints to. If you’ve followed my posts on FB or on Instagram, you will also have seen the sketches of the illustrations for the second book, which are just as remarkable as those from Forebodings, and which are now complete. Indeed, Michele (Meekehleh) sent me the last illustration just last week, one of the cold, foreboding capital city of Zeblinia. For this book, I wanted the illustrations to be more about the protagonists and events, and Michele has once again overdone himself rendering princes Aithen and Toras, a Lux Baiula, the furans and gnarlers, and Zeblinia, seat of a terrible, repressive society whose queen (or is it?) has decided that she must invade Alvinoria to rejuvenate her society’s genetics.

With all this going on, I have not been able to write a third chapter of the Ronin short stories, but I will do that soon, now that two other projects are ending.

That’s it for now, then.