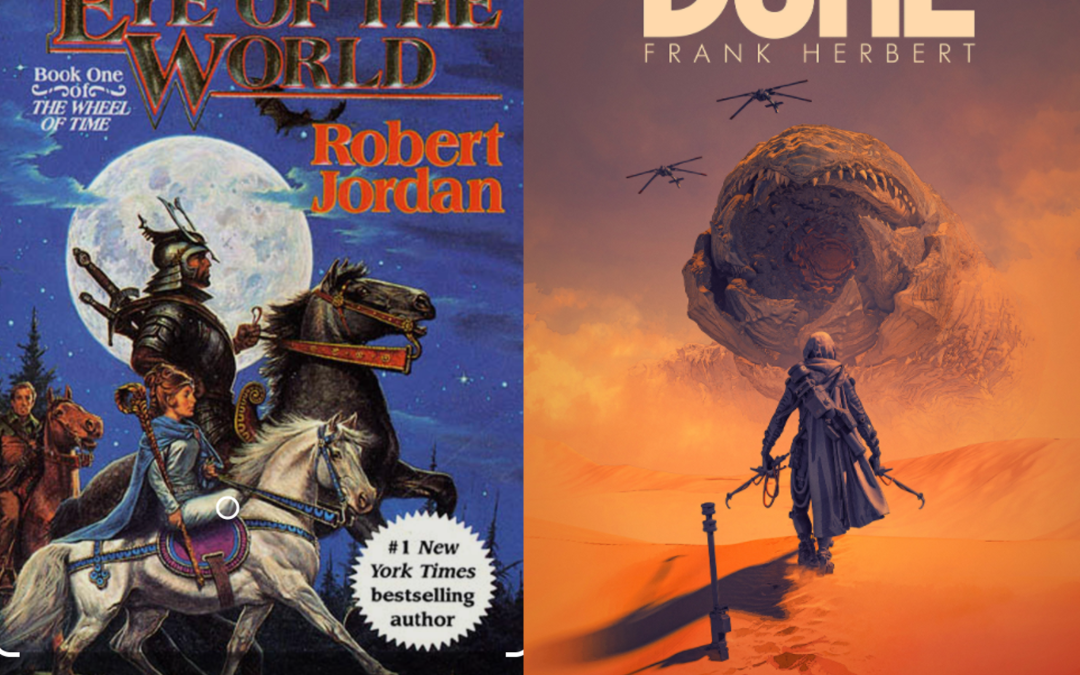 Did you know about some of the fantasy and sci-fi TV series and movies coming out this fall? I am so excited by some of it. But of course, whether I will love or hate these adaptations will depend on the performances, on what the showrunners will have decided to put in or leave out, and on their fidelity to the books, as always.

There is a much-awaited movie coming out soon. It is [another] remake of Dune, which was attempted twice before (in 1973 and 1984, the latter of which I personally liked), but this time, because of the director, the cast, the cinematography and the tone, it is expected to meet everyone’s expectations. I hope so. I absolutely loved the novel, reading all 17 books (6 original and 11 additional books by Frank Herbert’s son, Brian Herbert, and his colleague, Kevin J. Anderson) with equal eagerness though not all are equal. But, the thing is, once I get into a story and immerse myself in it, in its characters, following their continued lives from book to book, it is like living another life for all the years that the books keep coming out. So, though a particular tome may be duller than what first drew me to the series, it still gives me the satisfaction of having lived another span of someone else’s life, or having imagined another world, maybe better, maybe not, but another world nevertheless.

Having said that, I am looking forward to this new adaptation of Dune, and though it is not known whether Denis Villeneuve will turn this into a new franchise, it does appears that there will at least be a second part to this first movie. The film is set to open in theaters on 22Oct.

The thought that Robert Jordan’s The Wheel of Time is coming to the screen, that we will be able to see this great saga with all its plots and characters and cultures and powers unfold before our eyes is utterly thrilling to many fans, and I am one of them.

Why? Firstly, for a very selfish reason: I loved the novel and—being fourteen books long—I cannot easily re-read it all though I have tried to do so; whereas it took me a month to read a 500-page book before, it now takes me months, so I welcome the chance to “simply” watch it. Secondly, because being able to experience the story this way, with vivid reality, to see and hear Moiraine and the others wield the One Power and touch the True Source, see their struggles brought to life, be marveled with images of all the other cultures and landscapes imagined by Jordan, being immersed in the story in this way, from week to week, for the next few years—the idea excites me thoroughly and perhaps it does you too.

Of course, you might not know The Wheel of Time and wonder what all the fuss is about. Some call it the next Game of Thrones, though it will not have dragons in it nor be R rated, which comforts me. But like GoT, it is an expansive world with fascinating characters, political machinations, religious fanaticism, and various competing or allied realms. The importance of magic in the novel is another element that distinguishes the WoT from GoT; Jordan created a unique magic system with varied powers which will likely be front and center in the screen adaptation.

Some fans are wondering why so many of the main characters are being portrayed by non-white actors. I wondered too, for a moment, since the artwork for the novel has depicted them as white and the casting choices clashed with my memory. But, in fact, the illustrations changed over the course of the series (for instance, Perrin Aybara is depicted as white on the initial covers but as darker skinned on one of the covers for Book 13, Towers of Midnight. And, in any case, Jordan did not describe the Two Rivers folk as white, except for Rand (you can read an essay on the topic at Tor.com if you like: https://www.tor.com/2019/08/20/from-the-two-rivers-casting-and-race-in-the-wheel-of-time/ ). So, hopefully, people will not let their first impressions keep them from what promises to be a great series to occupy our thoughts and discussions for the next few years. As for myself, I like the casting choices, and if you watch the trailer (https://www.youtube.com/watch?v=3Fus4Xb_TLg), I think you will agree, too. Of course, the proof will be in the pudding.

The series will premiere on Prime Video on November 19. The only sad note is that the first season will be only 8 episodes long. Regardless, I am ready and eagerly awaiting it.