The third illustration for Eruption, Book 2 of Conquerors of K’Tara, is ready. After adjusting Noctiferus’s gaze, Michele sent me the files.

What do you think? Do you recognize a god in Noctiferus? Probably not. To Christians and other religions that represent their gods pictorially, the god is most often shown wearing simple clothes–the clothes of the poor. In some religions, they are naked.  In ancient times, gods were often represented in war-dress. To K’Tarans, this is the appearance of one of their gods, the first Founder, Noctiferus (though he was orignally known as Aiala’Rho, husband to Aiala’Rhi, the Orignator).

In this scene, Lusk Methrim, one of the main characters of the story, meets Noctiferus to report on his progress subverting Alvinorian society and to learn what his new mission is, which he will discharge to the best of his abilities though his deeds destroy him, all because of a hope. 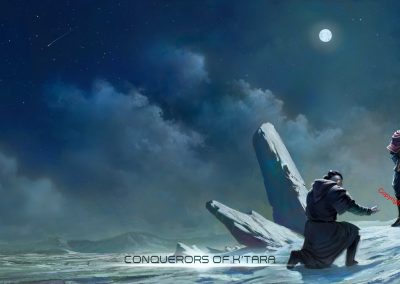